The Conference will open with the lecture

Anthropogenic climate change is “one of the greatest challenges of our time” as affirmed by the governments of the world. The latest comprehensive assessment Climate Change 2013: The Physical Science Basis by the Intergovernmental Panel on Climate Change (IPCC) documents a rapidly and profoundly changing Earth System and provides the latest understanding of changes ahead of us. The most important findings, approved by the governments are: (i) Warming of the climate system is unequivocal; (ii) Human influence on the climate system is clear; and (iii) Limiting climate change will require substantial and sustained reductions in greenhouse gas emissions. These scientific findings, in combination with the declared ambition to limit global mean warming to 2°C, create an urgency for decisions and actions. 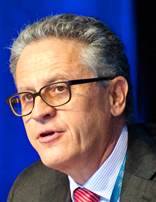 Thomas Stocker was born in Zürich and obtained a PhD in Natural Sciences of ETH Zürich in 1987. He held research positions at University College London, McGill University (Montreal), Columbia University (New York) and University of Hawai’i (Honolulu). Since 1993 he is Professor of Climate and Environmental Physics at the University of Bern. Thomas Stocker has authored or co-authored more than 180 peer-reviewed papers in the area of climate dynamics and paleoclimate modeling and reconstruction. Since 2008 he serves as Co-Chair of Working Group I of the UN Intergovernmental Panel on Climate Change (IPCC). Thomas Stocker was awarded a Dr. Honoris Causa of the University of Versailles (France) in 2006 and the Hans Oeschger Medal of the European Geosciences Union in 2009. In 2012 he was elected Fellow of the American Geophysical Union.

The full program of the conference is available here).