The Conference will open with a lecture on how the scientific knowledge is becoming  more and more crucial to provide rigorous information and data not only among the scientific community, but also to decision makers at national and international stage. The opening lecture will discuss the arguments that underpinned the EU policy on climate change, its effort to foster multilatreral climate protection and what it has meant for the EU to define climate change as a security issue.
(The full program of the conference is available here). 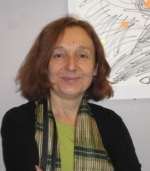 Angela Liberatore works in the Directorate General for Research of the European Commission as Deputy Head of the Unit fostering international scientific cooperation in the European Neighbourhood, Africa and the Gulf. She previously worked in the Social Sciences programme on issues related to governance, citizenship and conflict resolution and, prior to that, in the Environment Programme with focus on climate change. In addition to her Commission’s work, she teaches an evening course on Institutions and Politics of European Integration to the VUB –Vrije Universiteit Brussels. Angela holds a PhD in Political and Social Sciences (European University Institute) and a degree in Philosophy (University of Bologna). Her most recent publication is Climate Change, Security and Peace: The Role of the European Union (2013) and other publications include the book ‘The Management of Uncertainty. Learning from Chernobyl’ (1999).